You may alternatively call them application configuration files. You mostly do not add them in git or bitbucket due to the possibility of them containing sensitive information, e.g. database passwords, AWS access credentials etc..

If your production environment has a setup like above, you may have experienced bit of pain in changing .env variables. Specially when there is a quick turnaround required due to some urgency or bug where you need to update an .env file variable asap.

When you spin up a new instance, you have an option in Step 3: Configure Instance Details screen inside Advanced Details called user_data. This looks something like below :

You can write shell scripts in text area or upload a bash file as per your choice. When you launch an instance in Amazon EC2, these shell scripts will be run after the instance starts. You can also pass cloud-init directives but we will stick to shell script for this use case to fetch the environment variables from systems manager parameter store and generate an environment file, in our case .env file under laravel root.

Setting up variables in parameter store :

AWS has service called Systems Manager which contains a sub-service for resource sharing. This is called Parameter Store. There are couple of ways to store a parameter inside this service. We will be using SecureString option which makes sure the paramater value(which in our case is the enviromnent file contents) are encrypted inside AWS.

You may think that instead of storing entire .env file content into a single text-area, why should we not create multiple paremeters for each variable in the .env file? That's a perfectly valid point. However, storing it in one paramter store decreases overall maintenability and also makes the shell script to retrive those values very compact.

You can use below steps to store your .env file inside parameter store : 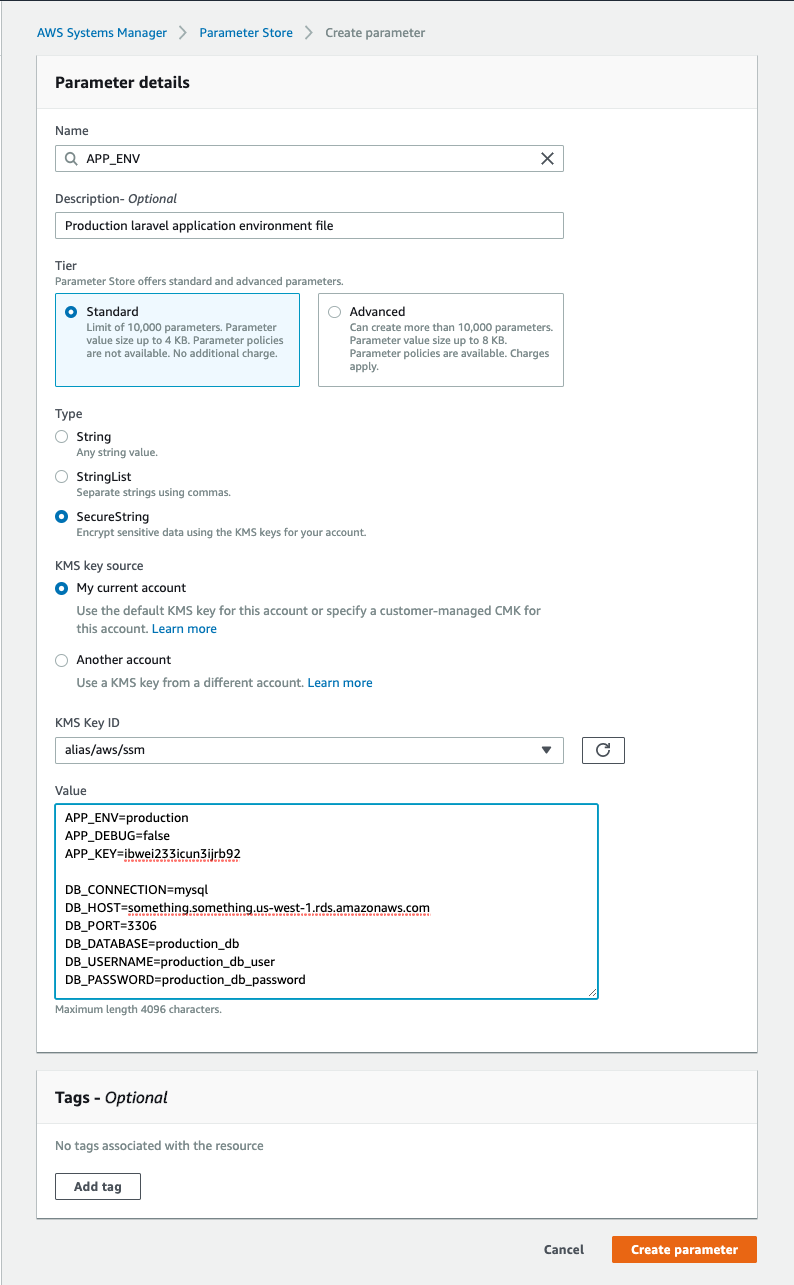 Your EC2 instance which runs the application will be accessing these parameter store values. So you need to make sure your instance IAM role has following permission in its policy.

We will be using following shell script to generate .env :

Let us now consider a very generic overview of how these pieces will fit together :

Let's say you have added a new variable in your env paramater group. You expect it to reflect ASAP in following situations :

This can be easily implemented as we discussed earlier using user_data. When you spin up an instance manually you can add the above shell script to pull latest .env from parameter group in the user_data field.

If you have auto-scaling enabled, make sure your launch configuration or launch template has the user_data field set with the shell script we discussed in the previous section. This will then make sure, whenever a new EC2 instance will spin up, it will always fetch the environmental paramater first from AWS systems manager's parameter group store and then make a branch new .env file.

Let's first take out the case where you have instance not in any auto-scaling group. You can then manually SSH into instance and fetch the new .env. (Or automate it using Solution B)

But in here main point of concern is when you have autoscaling setup and production is running on multiple instances. This is an area where we can have 2 solutions. First one is very easy to implement whereas second one can be a pain. Let's discuss both :

From your existing auto-scaling instances, start terminating an instance one by one. Your auto-scaling setup will then spin up new instances. As we discussed earlier, considering your launch configuration already has the shell script to pull updated environment variables from parameter group at the instance start from user_data setting, the new instances will be ready with updated environmental veriables in their .env files.

To add more automation, you may also do the termination activity using a lambda function or ansible based on a trigger when systems manager's parameter group is updated.

This is important for applications where there ephemeral storage is important for some ongoing tasks. If we terminate the instances, the production application will lose some of it's ongoing process data. In this case we need to find an automated way to run the shell script on all those running instances, to update their .env variables.

In this case, you can use AWS lambda for this purpose. The bottom line of this is When systems manager's parameter group is updated, it will trigger a lambda function. That lambda function will SSH into all your running production instances and update the .env file.

There is already a github repo I have added sometime back on running SSH commands on EC2 instances. You can click here to know more about it.

This may definitely appear as an overhead... But as your application becomes large, setting these things up will make your life so much easier.